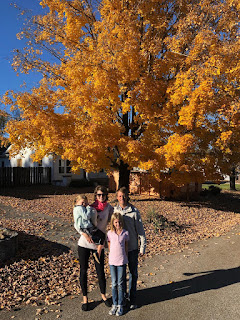 (link to our furlough video!)

Well, good news: Fall waited for us. We made it back to the US for Thanksgiving and will be here through March 21. Our schedule is pretty full and we start our travels to churches December 9 when we go to North Carolina. Our next update will be written from Michigan.

We had a wonderful November as we celebrated baptisms and had a good going away lunch at our church. They tried to surprise us although their consistency in getting together whenever possible made us suspect to their surprise. I was able to make a really neat anouncement at that lunch. I have told you several times about Seu Nino and will probably tell you about him as we travel to your churches. He finished the Story of Hope this month and confessed Christ as his Savior! I cannot explain how excited this makes me feel (and many others in the church). 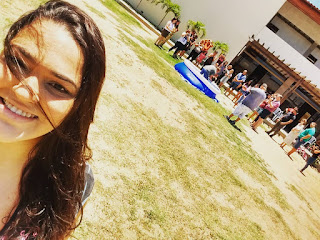 We baptized five this month and had a good celebration surrounding our time. I was able to present the gospel at the baptism service as there were many family members present to watch those who would be baptized (lots of grandparents) and they all come from varying backgrounds. This service as well as a baby dedication service our last Sunday in Brazil saw some visitors and provided us with a great opportunity to talk about Christ. 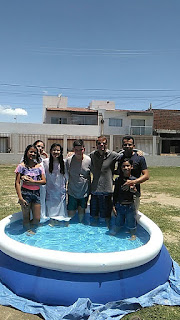 The last couple of months we have had a good bit of visitors and repeat visitors. A church donated some more chairs and we have been putting them to use and needed all of the ones that were purchased. We leave the church with our co-workers Roger and Marcy Smith who have been with us all this time. (He is the senior Pastor of the church). So we are not worried as we have them and a good core group of members.

The week before we left Roger, William (one of our leaders and my main co-conspirator in our Tupanatinga Bible study) and I went to Tupanatinga. We went early that day so that we could drive around the town. We were looking for a land/building to use next year. Please pray with us that God would give us wisdom and the resources we need as we decide on renting or buying land and building or buying a building. It looks like a land buy would be around 14-15 thousand dollars and that is before we would start building! So that would be a heavy investment. 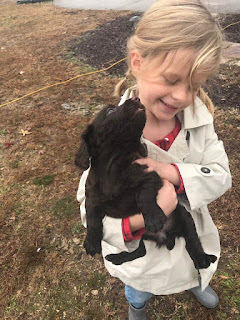 Speaking of finances. Before returning to Brazil in March we will be needing financial clearance. We are really close! But we just received news that our health insurance is increasing, so I am guessing with that increase and what we already need we are looking to raise around $350 more per month. (I have written up a commentary on our finances to be more specific, so if you would like to see that, please just reply to this email and ask for it! Basically we are raising that monthly amount as well as a one time amount for a car and for land for the church in Tupanatinga. That is a good chunk of change! So anyway you all could help would be great! Thanks guys!

We are now a couple months into our second decade as missionaries to Brazil! We appreciate you all’s prayer and support. Please pray that we would learn to be more effective and efficient as we seek to make disciples for God’s glory! (By the way, I finished my master’s degree and Sarah decided that she is going to do a master’s in Biblical counseling! She starts in February (Actually she has already started reading)). 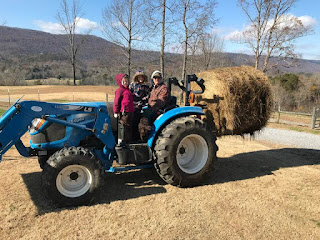 All for HIS glory,
David, Sarah, my soccer player (Evie has her first ever organized soccer game this upcoming week!) and my little farm girl (Anna Claire loves the kitty cat on the farm, the 7 new Boykin Spaniel puppies that were born on the farm and loves all the animals!)

Posted by David and Sarah Carrel at 4:31 PM No comments:

The main trigger for this post was witnessing the live news conference with President Trump on Wednesday the 7th of November when Jim Acosta from CNN started speaking to the President. I do not necessarily think the President has earned respect due to his politeness nor do I approve of many of his mannerisms; yet I do think the office of the President demands a certain level of respect.

What I witnessed in that conference is common in Brazil. The loudest person gets the platform. Recently I was accused of being a silent person in a meeting. In that meeting environment it is very true because the environment is full of talking over the next person and interrupting each other. I prefer to remain silent than to try to force myself to be rude in order to get in my two cents. It is not worth it (especially if it really is only worth two cents).

Respect should be given to those in authority whether it be Presidents, police officers, referees parents or whoever is in authority. I was not even raised in the South and I see the great value in using yes ma'am and no sir.

Besides those in authority, to whom else should we show our respect. My opinion: everyone. People can annoy the heck out of us or believe the opposite of us, but that person was made in the image of God. Jesus talked about how we should treat the "least of these brothers of mine." Treat them like you would treat Christ. I am not saying we have to agree with everyone, but we should respect everyone.

If we really got to know more people, listened to their stories, understood where their history, their passions and desires and what drives them, it would be easier to talk to them with respect. Most people's passion stems from a strong value that you might not disagree with at its core. Their fruit may look different than your fruit, but their core values probably have to do with being good and not destruction. The stories we tell ourselves are that these people would want to destroy us (which may be the case with some groups, but most definitely is not the norm). Understanding that most people are real human beings with ups and downs and passions can go a long way towards encouraging love within humanity.

So let's show some respect people!
Posted by David and Sarah Carrel at 8:12 AM No comments:

I do not think that I would do well posting every day for Thanksgiving during the month of November but I certainly can write a post about my thankfulness. This year has been wonderful for us. This year I have told many people that we have a great life. God loves me and has saved me and my family. We can have joy in Him daily if we so choose. This has been so clear to me this year. Misery is my choice; circumstances do not determine my happiness; I do. I am thankful that God has shown me this and that more often than not I am choosing joy.

My wife and children have been wonderful to me. Sarah has grown so much spiritually and is a great friend to people in our church. She runs and organizes the women's group, children's ministry and our household all at the same time. The girls are growing into well behaved sweet girls with their own personalities. Evelyn is growing up and taking on responsibilities. Anna Claire is a little crazy but is more and more sensitive to how to treat others.

God has sent awesome people to our church. We have many involved in ministry to the point where one visiting pastor said our people ministry involvement ratio is out of the roof. We have a solid Bible study in another town that is probably going to take a big step in organization as a church next year. So many people work hard with us and are so kind to us.

When I signed up for missions I thought I was signing up for a life separate from family and the benefits we enjoy as Americans. I thought we would be poor our whole life and would have many difficulties. While some of those thoughts may be true to a certain degree I feel like the missions life is not as difficult as it has been in the past. I prefer to be in Brazil; we are very comfortable here and our family has only extended to include Brazilian family. Our other families are a Skype call away and our furlough schedule has made it possible to see them fairly often. Missionary families use to move to the field and pack their belongings in coffins as it symbolized giving their lives for the ministry of the gospel.

We have a load of faithful supporters. There are 62 churches/individuals that give to us regularly. It blows me away that there are that many people who make us enough of a priority that they send their hard earned money to the mission so that we can live, work and make disciples in Brazil. We often get single gifts or anonymous gifts that carry us as well. Our actual monthly support level has been below our need for a while but because of people who give a little extra here and there we have not gone in the red (at least not since 2012).

Continuing to list everything would probably bore you as there is so much more. I do want to say though that I am thankful for my failures and weaknesses. We are all born with pride and it can come along so easily in life. I am already pretty prideful, but if I didn't mess up so much it might be worse. God is gracious, merciful, kind, good and Sovereign! Blessed be His name.
Posted by David and Sarah Carrel at 9:40 AM No comments: