My current course for my master’s degree is Strategic Thinking where we delve into the world of strategic planning. Throughout this course I have been inside of lots of strategic plans and recognized that Trump has been working under a strategic plan.

The main recognizable part of his strategic plan has to do with his slogan, “Make America Great Again.” This became very recognizable and he even had it branded. I think that he liked it so much that he decided to run because of it. This is his mission. A mission in what you do; it doesn’t necessarily have an end. His decisions revolve around his mission.

His vision he sells as well, talking about a safe and secure wealthy country. He throws in unity and a country of patriots as well.

His strategy has been his main talking points. He calls for secure borders, taking down ISIS, repealing Obamacare, bringing jobs back to the US, and cutting taxes. Of course, he has big dreams and promises, but he does provide a vision of what he plans to do.

There are other indications of his strategic plan, but without knowing it, the people really resonated with a plan. Whether you like it or not, Trump is a leader. He has a big following, despite most of the following being aware and not agreeing with his many faults. (Admittedly, that statement might be hard to agree with me on). People I talk to mostly say he is crazy, makes promises he cannot fulfill, but are still excited (and nervous) about seeing what he will do. But there is no doubt about it, he is a leader. 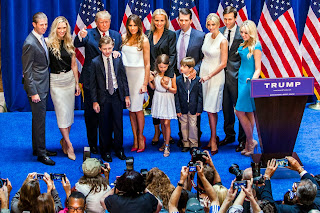 Trump turned a million dollars into billions. He is no fool, though one could say he acts foolish. He is a smart man that figured out how to appeal to the masses. Now, what choices do we have, now that we have him as president?

This is a tough question because we know how prideful he is about being right all the time; yet everyone knows that he is not right all the time. It might be best to just admit that he is right some of the time. Opposing him 100% of the time is only going to work backwards for the left. With the Republicans holding a lot of power right now, he is going to be able to do quite a bit. I imagine that opposing him will only want him not be willing to work with you or your type of people. He is a deal maker looking for deals. If you do not give him anything, he won’t give you anything.

We can protest. Yes. Sign petitions, wave banners, but for heaven’s sake, quit the violence! Yelling, screaming, burning and breaking things about injustice is kind of ruining to your own reputation and repudiates everything you are trying to state and makes everyone look down on you. While you protest Trump being like Hitler for ruling by force, you try to rule by force! Instead, protest civilly, whether marching, or signing petitions, or calling your representative. That is how government is supposed to work. The government needs to know what its people are thinking.

The third thing we can do is be leaders ourselves. I do not like the type of leader Trump is; but he is a strong leader that people are following. Learn to lead and may I suggest, learn to lead humbly. One humble leadership skill Trump does have is putting smart people around him. While they are mocked for being so rich….uh, doesn’t that mean they must be doing something right if they are so rich, they are there for a reason and it looks like Trump does want to surround himself with smart people, which is a strong leadership quality. So follow his example in that, surround yourself with smart people. We face a leadership crisis these days and although there is a debate on whether leaders are made or born; there is certainly things everyone can do to improve their leadership skills. 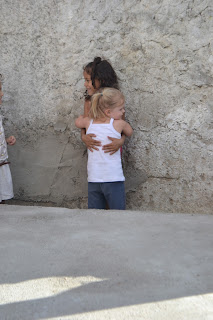 The last and most important thing we can do is love. Serve one another. Whether you are black or white, rich or poor, look for how you can make our society a better place. There are extremists on all sides of the aisle, may we all learn to be extremists in love. Assuming the other side is always wrong, deplorable, racist, sexist, ignorant, etc…. is not only wrong, but not going to get this country anywhere. I read an article today from a Muslim gay man today who decided to get to know the other side of the aisle right before the election and was surprised to be treated fairly and respectfully. Usually when I talk to my friends from the other side, they still remain friends. The only people I unfollow are the ones who constantly take mirror selfies. Laugh a little; love a little.
Posted by David and Sarah Carrel at 5:22 PM No comments:

What are we up to on furlough?

Why do we have a furlough? Sometimes we do not really want to have a furlough, but in reality, it is needed. Furloughs are based out of Acts, when Paul returned from his missionary journeys to report to the churches about all that God was doing. We have some main purposes that our mission board puts out for us to accomplish during furlough:
1. Rest
2. See family
3. Report to churches
4. Recruit new missionaries
5. Raise money
6. Use time for education
7. Do ministry from here

People understand furlough to mean rest and so some missionaries do not like to use that word and might go with home assignment as their term for furlough. I agree with them, but I do think we should rest. I know we needed it the last couple of weeks and have enjoyed sleeping a little more and having a more relaxed day. 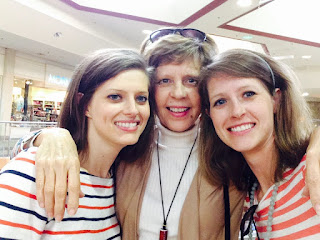 We love seeing family! This last week Sarah's sister Anna was in town with her son Judah and we were able to spend a lot of time with them as we stay at Sarah's parent's barn while we are here. We get to go see my brother in New Hampshire the first weekend of February and meet his children (twins three years old, one baby not quite a year old yet), whom my girls have never met! Then in the end of March we will head up to Michigan and meet a new set of twins my other brother and his wife had this last year!

We are reporting to a few supporting churches and one new church while we are here. So we will be in Georgia, North Carolina, Virginia and Michigan. If you are semi-close to us in Chattanooga, let me know and we can schedule more.

We need new missionaries in Brazil, especially with us in the Sertão! If you are interested, let us know and we would love to talk to you. We need football coaches for a quick mission trip the end of May if you are interested in that!

We do need to raise some money this trip. We are short around 200 dollars in monthly support and would love to raise the $30,000 needed to get us moved into our Cetak building! (click to watch a video tour of the building)

My main projects these days have to do with my master's program. Fortunately the program integrates your present work into your studies and has already helped me so much practically speaking!

As I work on that homework we are still doing some of the work we normally do on the field. I am using these days to develop the Servant Leaders program for the US and for Brazil. If you are interested in having a seminar in your church, let me know! The site for Servant Leaders is servantleaderstraining.com and has great resources! This is the program we will be integrating in our church and that we would like to help other churches implement. There is actually an external platform that helps with mentoring leaders, going through classes and facilitating learning. There is an application that goes with it as well. Please let me know if you are interested!
Posted by David and Sarah Carrel at 2:07 PM No comments:

I remember as a kid crying in the kitchen as President Clinton was elected. "How could this happen?" I asked my mom through my tears. She assured me that God is sovereign and it did not surprise Him.

This last year I watched as Hillary supporters cried when realizing she had lost the election. Come to think about it, each election cycle has spelled tears and doomsday predictions, yet, still we are here. Though many would debate me about the country worsening, the country still exists and is still a beacon of light to other countries. A trip to the US is still the dream of most foreigners as they wonder what it is like in such a great country.

The political state is worsening though. This election year had more votes against the other side than for their own candidate. The fact of the matter is that our politicians are a reflection of the people. Our people created Donald Trump and other politicians. If we have dishonest politicians it is because we have dishonest people. How can we have moral presidents if our people are not moral? People complain about the crude comments Donald Trump has made, but laugh at the same jokes on comedy central or the latest movie from Hollywood. What do we expect?

No matter who you voted for this year, think about the past. Last time your candidate won, or last time your candidate lost (besides a few million Americans). We know how it feels to be on the winning and losing side. Sometimes you lose in life, but it is not the end of the world. I listened to a podcast today where the speaker talked about losing all of his money he had in a sure investment. He said it was the best thing that could have ever happened to him because he could not get comfortable.

We should not be comfortable with where we are at as a society. We need leaders who will influence change on their neighbor and it starts with love. Don't argue, love. Don't shove your beliefs down people's throats; love by listening to them. Last night I listened to a friend from the other side of the aisle. He was not a racist, sexist, murdering, annoying guy; he was passionate about people. Most people who have strong opinions are passionate about people. They do not want their loved one's rights to be infringed on. You see, we are not all that different; we just have different perspectives that are misunderstood by an inability on our part to listen to others.

So start today with love. Love through listening. Don't argue; at this point it is not worth it. Few are convinced by arguing anymore. Love and let that do the talking.
Posted by David and Sarah Carrel at 4:44 PM No comments: