Blessed is how we feel after this month. Sarah had a good visit with her family to see Judah, her sister’s new baby. The same morning I picked her up from the airport, I picked up Zach, a Liberty University missions student who is doing a 5 week internship with us. He has been a help for us, especially as we received a team of 11 from West Huntsville Baptist Church and Ashley Hancock, our new team member here in Arcoverde. 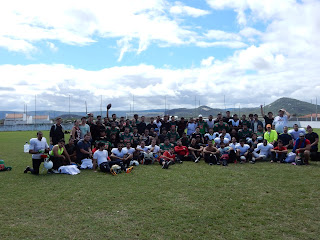 Ashley has transferred from São Paulo in South Brazil and will work with youth and women’s ministries in our church. She arrived with the missions team and helped out translating during the week. We are now helping her get settled here in her new home. Pray for her transition.

The missions team was a huge help in making contacts. The football team was excited to have an ex NFL player to coach them for the week. We just happened to have a training camp with another team from Recife and Hoss Johnson and Don Eade were able to coach them as well as speak into their lives spiritually. They showed their appreciation by showing up to our Sunday night Bible study where we had to rent the hotel auditorium to fit everyone. The team shared some testimonies and people showed up whom I never would have imagined and others who had promised to come for a long time. On Monday through Thursday the team taught VBS, ran football practices and ran a time of English conversation. All went better than expected and we made many new contacts. 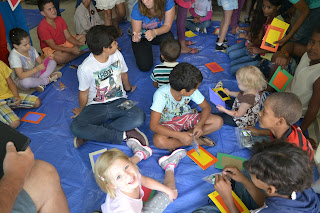 I have had a couple conversations with Danilo, one of my English students, before and he has always been closed to anything with church. At the English conversation at night he cornered Scott, who does teaching on dinosaurs all over the world and wanted to ask him questions about dinosaurs. Danilo had always believed all the teaching on evolution done in the schools and had never heard how dinosaurs lived with man. He went away with a new perspective on dinosaurs and the church! 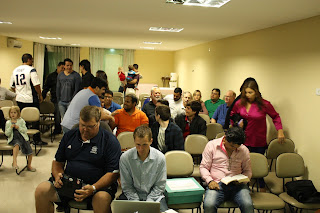 Marcelo has had some relationship problems and sought out the football coaches for advice. He ended up going to anything he could while the group was here and showed up for our Sunday and Wednesday night Bible studies (where Sunday we more than doubled what we normally have).

In October we will start a 4 month furlough. We have a conference with ABWE in Orlando from October 19-25, so we decided it would be beneficial to go home for a few months to see our families and so later we aren’t gone for a year from Brazil. If you are a supporting church and would like us to visit, speak now or forever hold your peace. Well, at least speak soon… So far our plans are to arrive October 12 (in the Chattanooga area where we will be based during those few months), go to the conference in Orlando, be with my family during Thanksgiving week and Sarah’s family during Christmas and then head up to Michigan for New Year’s. (And of course plans change sometimes).

Much love to you all! All for HIS glory,

David, Sarah, my motivated 1st grader who is into crafts and helping out, and my energetic little bunny that enjoys going for walks, playing in mud and making messes. (clicking on the link will take you to yesterday's photo shoot with the girls
Posted by David and Sarah Carrel at 3:36 AM No comments:

Oh come on; we all know the power of prayer. Why don't we do it more?
Posted by David and Sarah Carrel at 5:21 AM No comments:

Last night we had a Bible study where the intern, Zach, who is staying here for 5 weeks taught on the birth of Samuel. He mentioned that the chapter (I Samuel 1) could have adoration as its theme because all throughout they worshiped God. It didn't matter the circumstance.

We had just come off a week of someone getting saved because of difficult circumstances. It is crazy to think the length of God's love for us. He does what it takes to accomplish His will. Because of this, we can thank God through our difficult times because we know that He is accomplishing His purposes in our lives.

Prosperity is popular with many, but the reality is that God often blesses us with difficult circumstances so that we can grow closer to Him. "We know that all things work together for good to those who love God and are called according to His purpose. For whom He foreknew He predestined to be conformed to the image of His Son!"(Romans 8:28-29 God loves us so much that he puts things in our life to make us more like Christ. That is why we can glory in tribulations. When is the last time you thanked God for a difficult situation in your life because you perceived that He was making you to be more like Christ?
Posted by David and Sarah Carrel at 2:35 PM No comments:

What did we think would happen?

I am two days into being a single parent. My wife went to the US (we live in Brazil) for a week to visit her family and I have the two girls with me. And I have my parents here with me; which is plenty of help. But the girls miss their mom. I know that if she were to never come back my kids would get used to it, (and don't worry she IS coming back), but not having her makes a huge hole in our family. I can't imagine life without her.

Evelyn, Anna Claire and I have had some good quality time together the last couple of days. Their mom is their security blanket and I am needing to give a few more hugs, a few more bull rides and a few more stories in order to keep enough of that blanket around them so that they do not feel abandoned. No one can replace the feeling of a healthy family environment. It is no wonder we have so many crazy things happening in our world with the lack of secure families that exist.

I can't help but wonder how other families get along without a spouse. I know they do, but it has to be pretty difficult. The ruling this past week caused me to think more about our families. My first thoughts were "what did we expect?" The divorce rate in the US is terrible and in the churches is not much better. Families are often torn apart and the norm is having an abnormal family, which I guess would make the abnormal family being the normal family. We expect the nation to look to traditional marriage with respect when we have made it a joke.

Marriage is not easy. Sarah and I have experienced plenty of ups and downs and the "easy" reaction of the moment is to give up. The biblical response should be to love and fight for the marriage. Which is interesting because Christians all over are citing the Bible when it comes to defining marriage between a man and a woman, but ignoring the part about staying married. If we are going to make a big deal about the court ruling we need to make a big deal about the state of marriage in our churches.

God created marriage partly to understand Him better. The roles played by husband and wife or mother and father are completing roles that are beautiful to behold when they are played correctly. The trinity has roles as well that complement each other and cause us to marvel at the holiness of our God. The man and woman's responsibility in the marriage may not be the same, but it is of equal importance (well, maybe the mother's is a little more important). Distorting this truth has destroyed the idea of marriage. No one knows their roles anymore. It is no wonder that mixing up these roles has blurred the lines of marriage.

So my challenge to you is this; instead of criticizing the world for acting like the world, how about we make our own marriages and families enviable.
Posted by David and Sarah Carrel at 8:20 PM No comments: