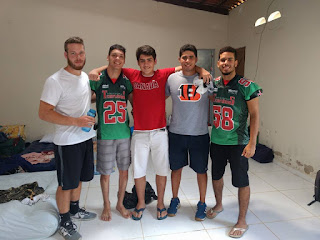 The doors are open for football in Brazil. But what does that mean? How can Christians take advantage of this growth? I have heard of a couple of missionaries being involved with teams, but there is so much more we can do. We are already involved in camps/clinics, coaching, playing and networking. We teach character as well as the fundamentals of football during our clinics. If you played in high school or above you are probably qualified to help out. We usually have a camp in early June. We could also setup another clinic as well. If you are interested in being involved in a camp, please let me know using the contact info below. 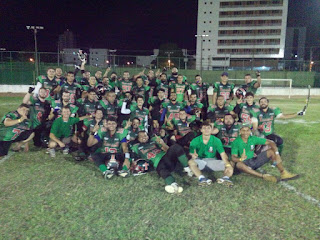 Besides taking a 1-2 week short term trip, we could also use players to come down for 5-9 months. We currently have a graduate from University of Northwestern in St. Paul who played four years of college and has come down to play a little more as well as help with the church plant here. With football experience under his belt, he already comes out with a leverage on the players here. He can be great influence on them in little time. Brazil has many more teams and some of them are in cities with missionaries in them. You can come down with one of your friends (or we can hook you up with another player), live, work and play with them and help out a church plant as well. One cool thing is that you probably won’t have to raise support or self support yourself that much. Some of the teams have money to pay your passage and visa as well as living costs. Some might just be able to do living costs, but either way, you won’t have to self support your self that much. Some places would even find you some sort of work you could do to make some extra money (don’t expect too much though).

We have already started looking for players to come next year in either February, March or May to stay through November or December. Ideally we would like players who have played in college and already graduated. We also need guys with character and a passion to make Jesus’ name known. Come be a part of what God is doing through football in Brazil!


or leave a comment below
Posted by David and Sarah Carrel at 7:53 PM